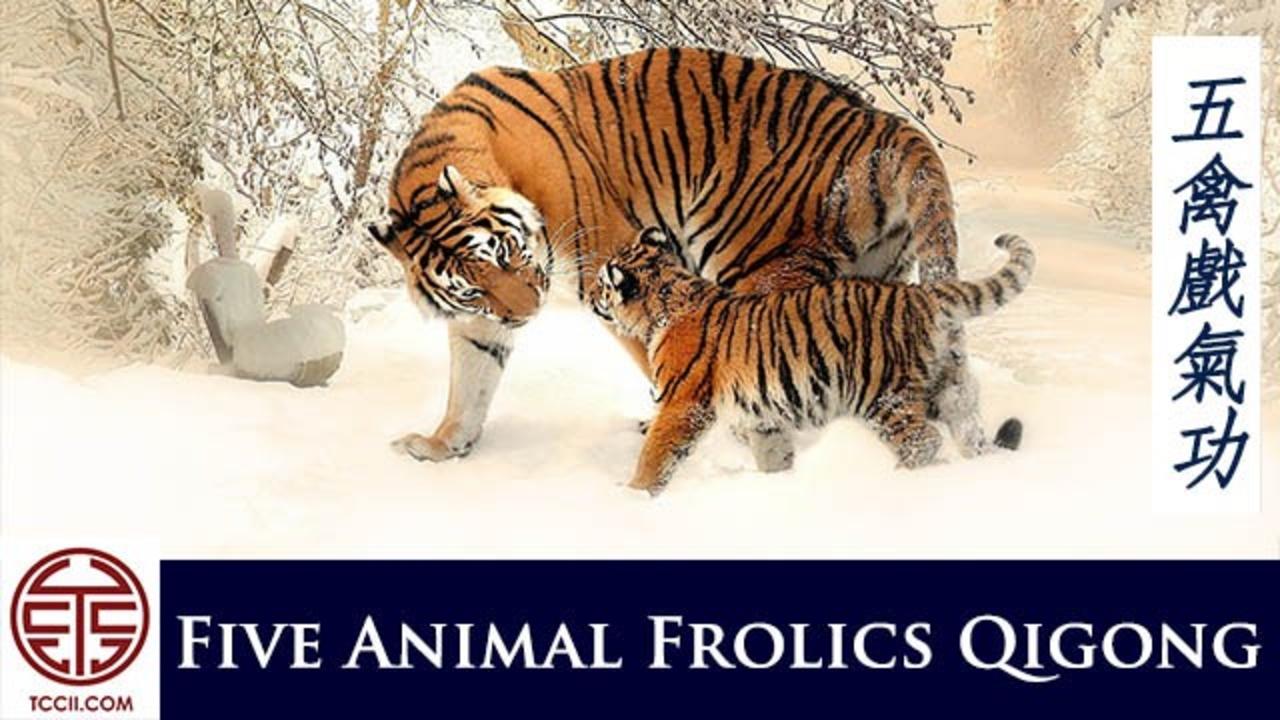 The Five Animal Frolics Qigong (五禽戲氣功 Wǔ Qín Xì Qì Gōng), also called the Five Animal Movements or Five Animal Play, are lively and profound Qigong exercises modeled after the Tiger, Deer, Monkey, Bear, and Crane. The original set was credited to Huá Tuó 華佗 (110-207 AD), an extraordinary healer who is often crowned as “the father of Chinese Medicine”. It is the most ancient Qigong exercises still practiced today by millions of people, and one of oldest continuously practiced healing exercises in the world.

Our traditional family system of the Five Animals consists of 4 sets of five animal movements, practiced with mindfulness and spontaneous play of animal's primal energy. It was passed down to us through a traditional Taoist medical lineage, not the popular "made by committee" forms so common today.

Our system of Five Animal Frolics is a complete and integrated Qigong system that develops strength, flexibility, balance, and abundance of Qi. The Five Animals frolics are often called medical Qigong because they can be used to cultivate and circulate the Qi for healing purpose.

Internally the practice opens the Qi channels and cultivates Jing (essence), Qi (vital energy) and Shen (spirit). Externally it improves the function of bones, joints, tendons, muscles, circulation, eyes, hair and skin. They are also considered martial Qigong because various Chinese Boxing forms such as the Southern Shaolin Five Animal Kung Fu were influenced by them.

They are also spiritual Qigong as we reach connection and harmony with the animals and the nature through practice. Practicing the Five Animal Qigong brings out childlike innocence and care-free human nature. In the end, we are not just imitating the animals – we become one with their wonderful spirits.

Dr. Yinong Chong and Shawn Cartwright have developed an approach to teaching Five Animal Frolics that enables you to understand the inner workings of the medical Qigong principles. With their guidance, the essence of the five animals will become alive in you. You will see the energy and spirits of these animals soaring through your body, your meridian channels, and your whole being. These teaching will evoke your innate animal instinct and natural beauty, as well as bring vitality and rejuvenation to your existence.

You can get a demonstration video of the main 5 Animal Frolics Qigong Movements on our Qigong DVD.