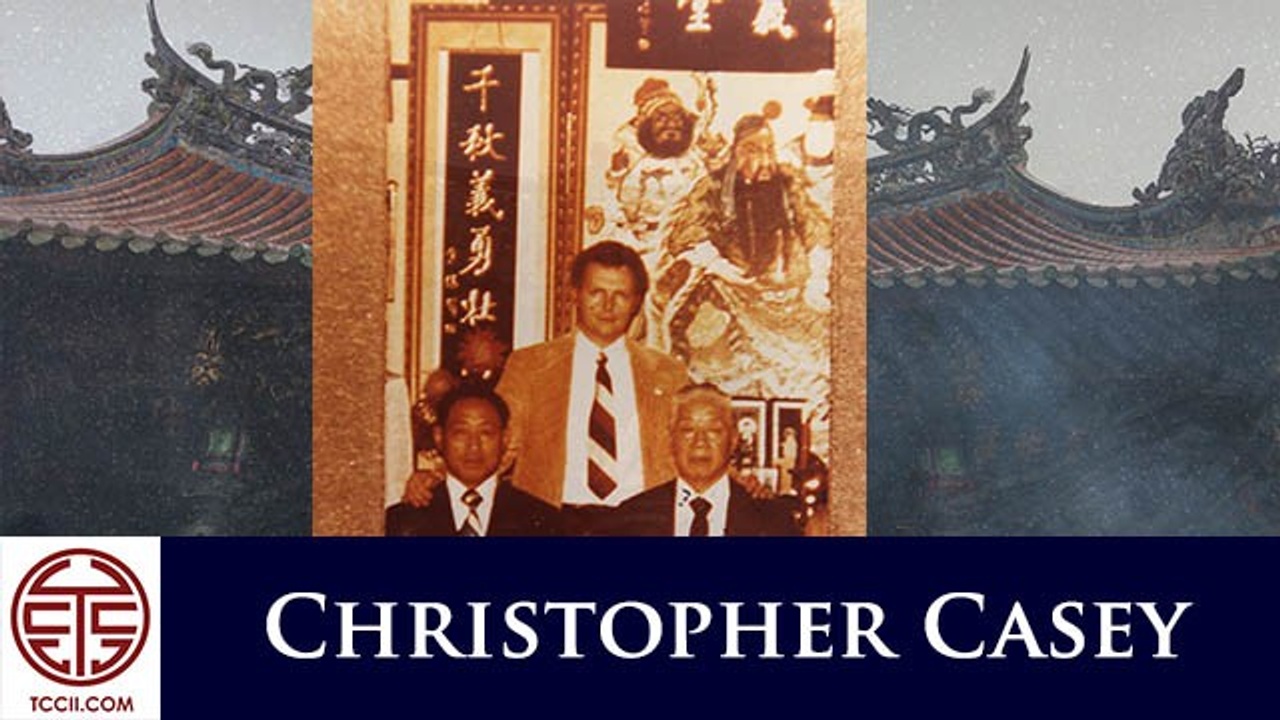 Mr. Christopher Casey (d. Dec 11, 1986) aka "Shifu Kai Sai" (Kai Sai being Mr. Casey's name transliterated into Chinese) was responsible for preserving the actual combative methods of many traditional Chinese Boxing arts in the 20th Century. Mr. Casey studied many traditional internal arts in Taiwan. These include Tai Chi, Hsing-I, and Pa Kua, Wing Chun and Fukien White Crane. He had the benefit of full membership in the Heaven and Earth Society (Tiandihui, Hong Men) who were influential in the preservation and spread of Chinese Boxing.

Mr. Casey refined this synthesis of traditional martial arts with Qigong, Internal Alchemy, and his own personal philosophy. He was especially know for his mind training methods which combined his love of both Eastern and Western Philosophy with esoteric Taoist and Buddhist methods. He preserved many rare systems of Chinese martial arts for posterity, such as:

Yim Wing Chun (Yongchunquan) from the Yip Man lineage as taught by Grandmaster Lo Man Kam, Yip Man's Nephew and Indoor Disciple. It was passed down from the Buddhist Nun Ng Mui to Yim Wing Chun.

Pa Kua Zhang (Baguazhang) from Grandmaster Wang Shu Shin and Grandmaster Shen Mou Hui. It was passed down from Dong Hai Chuan who is credited with creating this art by combining Taoist Practices with traditional Chinese Kung Fu.

Yang Style Tai Chi Chuan is derivative of the original Chen Style Taijiquan. It was passed from the Chen Chen Family to Yang Luchan and eventually to Cheng Man Ching, who shortened the form to create the Short Yang system. Our Yang Tai Chi Chuan system comes from Tao Ping Siang, who is also a Water Boxing master (Liu He Ba Fa.)

Tao Ping Siang, best known for his Yang Tai Chi Chuan, actually studied many styles of martial arts. Liu He Ba Fa Quan is also called Water Boxing, though that specifically refers to one aspect of the system. Attributed to the Daoist Immortal Chen Tuan, and taught by Wu Yi Hui in the early 20th century, this style is a synthesis of several internal styles and Taoist Neidan.

Liao Wu Chang, known as the “Monkey King” was a famous boxer in the southern tradition. Liao, like most masters, studied and taught many styles of martial arts. Much of his curriculum was similar to Fukien White Crane, but his personal method of boxing was called Stone Killer Money.

Wa Lu is a rare family system in the southern tradition. The art is a derivative of Fukien Boxing. Christopher Casey learned Wa Lu from a man named Pa Ka who had a small school on the island of Macao. Wa Lu is sometimes called “The Bridge Art” because it assists the practitioner in moving from the so called "external arts" to the internal arts. The heart of the art is a basic conditioning drills. The art includes forms, weapons, mook training, conditioning, applications, and kong sao.

Chang Tung Shen was perhaps the most famous Chinese Wrestler of the 20th century. His method was taught at the Central Police Academy in Taiwan. Chang blended Tai Chi and other arts with his Shuai Chiao.

Christopher Casey studied Bruce Lee’s JKD methods with Taky Kimura and Dan Inasonto, eventually becoming Taky Kimura’s senior student. In keeping with art’s original formulation, we do not refer to these methods as a ‘style.’

Many of Mr. Casey’s teachers were proficient in multiple styles of Kung Fu, including Shaolin methods. The term Shaolin can denote a vast assortment of martial arts styles, but traditionally, Southern Shaolin Kung Fu is most famous for its Five Animal Methods: tiger, leopard, snake, dragon, and crane.